Do You Think Buffett Has Lost It?

Some have suggested that Warren Buffett has lost it, as he trails the S&P 500 over the last 5 years. But Ben Carlson shows that historically Buffett has really outperformed during the downturns. 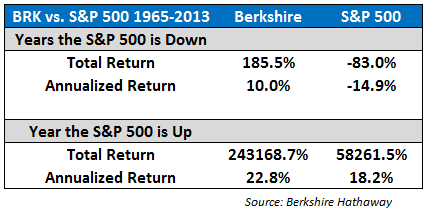 “The best investors do not target return; they focus first on risk, and only then decide whether the projected return justifies taking each particular risk.
— Seth Klarman

Are You Chasing the High-Fliers?

Do you own popular stocks like Twitter, Tesla and Netflix? If so, you shouldn’t expect much from your portfolio, according to Patrick O’Shaughnessy at Millenial Invest. Measuring popularity by high share turnover, the most popular stocks have tended to badly underperform the market.

This isn’t surprising, as their popularity makes them expensive in good times and they tend to get hit harder in downturns. As O’Shaughnessy notes, you are generally better off avoiding these stocks. As an added bonus, doing so will give your portfolio a value tilt.

Do You Think You Can Identify the Big Winners in Advance?

This chart from Scott Krisiloff shows the downside volatility of the biggest winning stocks over the last decade, as of summer 2013.

These are great returns, but would you have held on when they had drawdowns of 60% to 90%? If you are going to invest in the exciting, go-go stocks, you better have a strong stomach. And are you really sure you can identify the long-term winners in advance and discard the flameouts? Good luck with that, but this isn’t the game I play.

“If investing is entertaining, if you’re having fun, you’re probably not making any money. Good investing is boring.”
– George Soros

Remember the saying defense wins championships. A la Warren Buffett, this sports truism works in investing, too. Don’t forget the math of drawdowns. 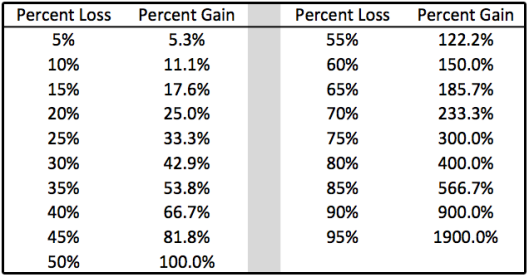 “Ultimately, nothing should be more important to investors than the ability to sleep soundly at night.”
— Seth Klarman

This site uses Akismet to reduce spam. Learn how your comment data is processed.

My views on the market, tech, and everything else

A Wealth of Common Sense